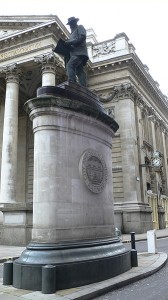 Bank Station is interlinked with Monument Station and they serve Docklands Light Railway and London Underground services. Therefore, together they make up an important public transport complex serving the entire King William Street. The name “Bank” was taken from the Bank of England. The station building dates from 1900, when it was inaugurated near Bank junction. It includes the Waterloo and City, Northern and Central lines, as well as a Docklands Light Railway line. The link between Monument and Bank has been performed in 1933 and nowadays, it is considered to be the ninth-busiest Underground station.

The very first station on the site was opened in 1884 and it belonged to Metropolitan Inner Circle Railway. The second station was founded in 1898 and the third station and also the first named Bank was completed in February 1900.

In 1900, but this time in July, the Central London Railway was opened and the Monument link was founded in 1933. That was the year when Bank and Monument Station became one of the busiest and covered for a large part of the City of London. Finally, the Docklands Light Railway wasn’t opened until recently, meaning 1991. That was the last line added to Bank Station.

In order to get from the airport to Bank Station, you can just take a London Stansted Taxi that will take you directly to the destination. All the other means of transportation have stops on the way and interchanges and it will take much longer to get to the drop-off point.

A Stansted Taxi to Bank Station with 247 Stansted Airport Transfer will cost you £57 for a saloon car. The transfer will last almost 1 hour and 15 minutes.