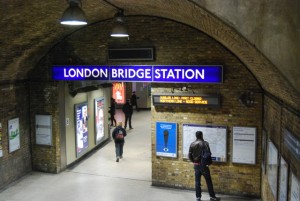 The station takes its name after a bridge that originally was the only one over the River Thames, until the Westminster Bridge was built, in 1750.

The station was opened in 1836 and it is clearly the oldest station in London and probably one of the oldest in the world.

Due to the fact that the Bridge has been rebuilt in the same place ever since the Roman period, it is not a mistake if we say that it has seen the transformation of the city and also the station’s  ever since then. The famous children song “London Bridge is falling down” is inspired by the bridge from the earliest days, build from wood and clay, so a very unstable structure.

London Bridge station had several restores over the years. One of the most important took place in 2012, when the Shard has been built nearby. In 2011, a new development plan has been revealed. Therefore, the works, scheduled to end in 2018, will unfold a bigger station for passengers and an easier way for train service operations.

If you want to go from London Stansted Airport to London Bridge Station, you can to take the following routes:  by train, from Stansted airport to the City of London and stop at Liverpool Street Station, EC2M 3TY in the center of the city. From there you can take the city bus until London Bridge station or you can walk, as the distance is not so great. The bus lines that you can use are 149, 47 and 48. There is also another transport option, by bus. The routes are the same. The bus from Stansted airport to Liverpool Street station comes every 30 minutes and the journey takes about one hour

247 Stansted Airport Transfer offers Stansted Taxi Transfer to London Bridge Station in optimal conditions. The price starts from £60 pounds for a standard saloon car and the journey will take about one hour and twenty minutes, rush hour traffic included.