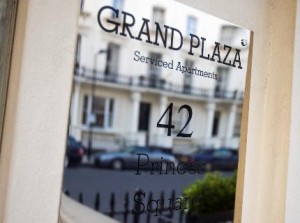 London is one of the most influential capital cities in the world, when it comes to a variety of domains and subjects. For travellers, the most striking features are touristic landmarks, history, politics, fashion and nightlife. However, we should never forget to mention all the wonderful accommodations, ranging from hostels and three stars hotel to luxurious venues. Grand Plaza is such an example, renown on a worldwide level.

Among its most attractive features are: central location at a walking distance from Hyde Park, 24/7 customer service including reception and a friendly staff, spacious and modern rooms, attractive architecture and interior designs, and last but not least, their unique Grand Plaza Bistro that offers you a 100% English breakfast.

The main purpose of this accommodation is to provide a mix of 4 stars facilities with the comfort of your own home. This is why each apartment has its own bathroom and kitchen. But do not worry, if you do not feel like cooking on your holiday, there are plenty of nice restaurants nearby. We should not forget to mention that Grand Plaza Bayswater is located in the W2 area, meaning that the City, West End and all of their glamour and entertainment methods are at your disposal.

In order to get a Stansted to Grand Plaza Bayswater Transfer by rail, you could take the train from Stansted Airport (every 15 minutes) via Liverpool Street Underground (every 5 minutes), followed by a 9 minute walk. This journey will take about 1 hour and 13 minutes. The second option is to take the bus from London Stansted (every 60 minutes) via Victoria (every 15 minutes), followed by a short walk of only 9 minutes. This journey lasts about 1 hour and 40 minutes.