After the World Wars ended, the Liverpool Street Station entered a state of disrepair and in the 70s it was just a dank, dilapidated and dark station, having nothing in common with the past grandeur. Between the years 1985 and 1992, it has been modified, repaired and improved, offering it the appearance we all know now. A brand new booking office was constructed in the underground and all the platforms were brought to a common end point. The Victorian façade, the cast-iron pillars, as well as the GER memorial were preserved to evoke its beginnings. 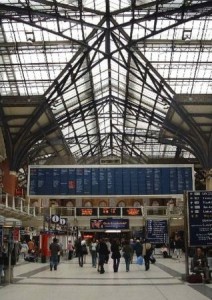 A huge departures board was placed above the station concourse. Even though it cost a lot of money, it was not operational until a few months later. It was the largest mechanical display in the United Kingdom, but it was taken down in 2007. A couple of electronic boards took its place.

Another entrance was opened in 1992 on Bishopsgate and the roof was maintained with the same style as the pre-War one. The only difference is that the old one is made of smoked plexiglass and the new one has clear glass. There is a uniform line that marks the end of all the platforms. The platforms numbered 18, 17 and 16 can accommodate only 8 carriages, while all the others can accommodate 12 carriages.